With the recent release of Game of Thrones season 7 we thought we’d have a bit of fun matching our dressings to some of the main characters. It’s not quite Wine + Cheese but a little light-hearted fun makes the world go round. Some of our team are obsessed GOT fans while others aren’t so fussed. However, Just like many of the characters in the popular HBO series they all like a little on the side! (A little Red Kellys on the side of their meals and salads that is)!

Just like our original and best-selling dressing Winterfell originates from a cooler climate, is natural and fresh and is still going strong. Our Traditional dressing has had a few name adjustments several of which have fallen along the way, much like several of Winterfell’s main characters have fallen. It’s smooth (like Rob Stark), sweet (like Sansa Stark), Tangy (Like Catylin Stark towards Jon Snow) and addictive (like watching Arya wipe out bad guys). An honest dressing full of goodness (like Ned Stark) that’s so good you’re likely to lose your head over it!

A dash of heat, a balanced Tang, plenty of goodness, some mouth-watering “Dishes best served cold” and beautiful. This isn’t a bad account of our nationally available bright red dressing and it certainly covers everyone’s favourite dragon wielding young lady! We have a dash of fresh chilli, she has a dash of dragon fire, we have tangy Lime to balance, she has worldly advisors, we’ve expanded from Tasmania across a narrow sea (Bass strait) and conquered shelf space in major supermarkets, she’s conquered kingdoms and has now crossed the narrow sea!

Basil and Garlic go together like brother and sister and, well, you get it. Just like our Dressing, Jamie is smooth, winning (well he’s still got 75% of his arms anyway) and has plenty of goodness within (easier to find in our dressing admittedly)! While our Basil Garlic hasn’t stabbed anyone in the back it is a force to be reckoned with and holds its own on the shelf. Fantastic with Pasta salads and Italian style dishes (Isn’t Tarth part of Italy??).

Our Caesar dressing is wholesome, full of all the good things, a rightful leader on shelf, smooth and creamy and only a little bit thick and has just the right amount of salt (Anchovy) while having far less than many of our competitors. Sounds a bit like Yara; Nice girl, natural leader, a little think and a bit of salt. Unfortunately for Yara, she looks like she’s about to be “Delisted” which certainly isn’t the case for our Creamy Caesar dressing, we’ll be keeping that one in our show! Let’s hope Theon suddenly grows…. Well let’s hope he has the courage to try and save her!

Some of our competition + Ramsay Bolton

Just like Ramsay we’ve found some other dressings over the years, that, while they appear nice on the label are actually not too pleasant inside the bottle. And in time they were thankfully eliminated (perhaps not by a pack of savage dogs though). 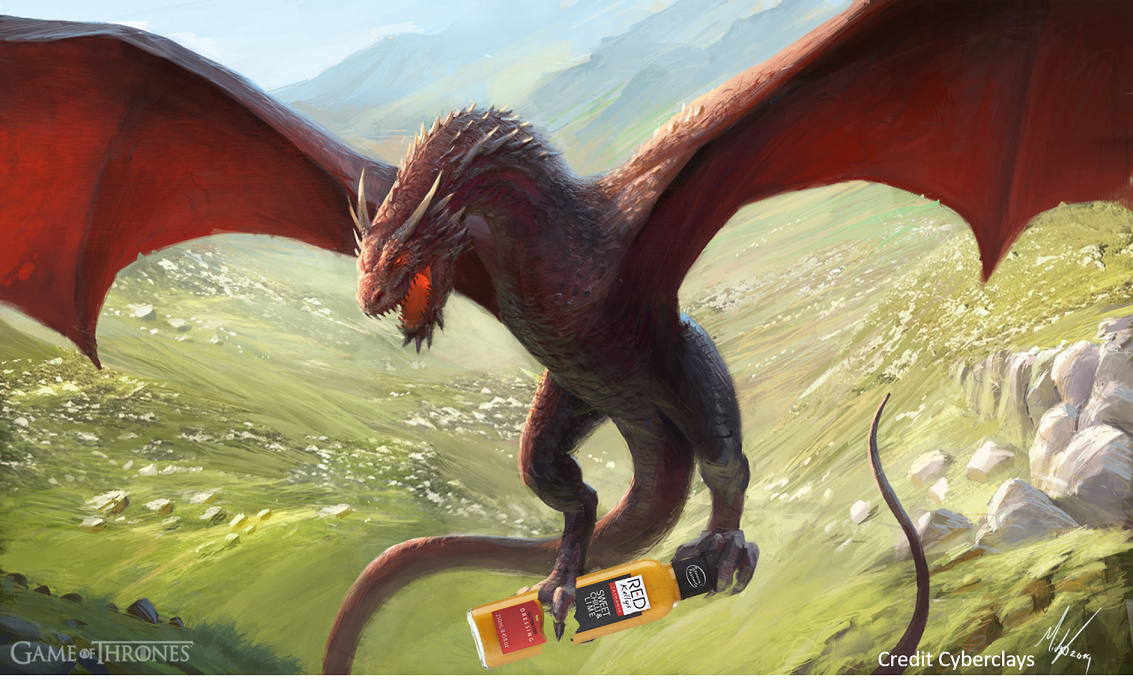